im looking forward to this game, as we do need to get something out of it,

Piccsnumberoneblue
Donated to the site

time we got them back for 2002/3 when they were 4 up inside 20 minutes and we clapped the buggers off. Things have moved on since then
Never criticise a man until you've walked a mile in his shoes.
That way when you do criticise him you'll be a mile away.
And you'll have his shoes.

Lucky we're not in Europe this year...cos he 'Ain't goin on no plane!'

3-0 City. Ade twice plus Robson.
“I may be drunk, Miss, but in the morning I will be sober and you will still be ugly.”

This is going to be a quality game hopefully.

I can't believe you're all so confident against Arsenal! Are you sure you're City fans? After watching them batter United a fortnight ago and somehow lose, I'm predicting a very tough match. Draw is the best I can see, I hope I'm wrong of course! ;-)
"..The object of playing any game is for enjoyment. If you have enjoyed it and done your best you have won no matter what the result." - Joe Mercer OBE

Arsenal to win this 3-2. Our goals Adebayor and Lescott.
Sometimes we're good and sometimes we're bad but when we're good, at least we're much better than we used to be and when we are bad we're just as bad as we always used to be, so that's got to be good hasn't it?

Going with my heart on this one (as Im allways loosing my head!)
"I hate to advocate drugs, alcohol, violence, or insanity to anyone, but they've always worked for me." - HST

Monsters are dangerous and Kings are dying like flies arround here...

Twobob
Donated to the site

I think there will be goals, but I've no idea how our defence will cope, we've not been tested by any real quality in the league yet.

I have two predictions....

I really can't decide between the two......
Derby Day The Scores Were Level
Then The Goat Was Fed By Neville
Silly Boy Should Know For Sure
Feed The Goat and He Will Score

2-0 With Robbie to break his duck. Kolo will knock one in from a corner, kiss the badge in front of the 5th best team in the league, then remember he plays for us. 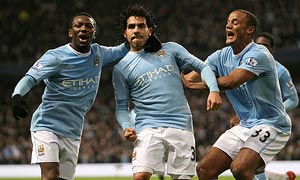